We will start with the line-up: 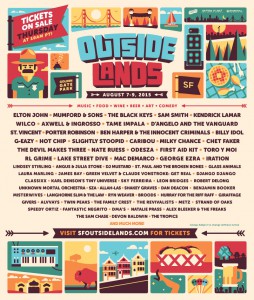 Let’s just say, that hands down Outside Land kicked so much major ass that I have been dreaming about it for days now. The first night post-festival, I was taken in my sleepy slumber to see Chat Faker (who I had missed seeing in real life) and have since spent several nights in my dreams being swallowed (in a good way) by hunky blonde festival men.

If that is any indication of the level of SEXY this festival has, let it be. It rocked. I moved out to the Bay Area from Nashville (music city) and have not had much experience with the West Coast Festival scene (aside from EDC in LA several years ago–yes, the year someone died). Either way, I was wholly impressed by the festival. The set-up was beautiful, the acts were on time, the opportunity to breathe fresh eucalyptus air was enough to keep me recharged for days.

The food was delicious, the size was manageable, the lines were manageable. There was not too much dust. People were generally  friendly, and music lovers alike which made for a wholly enjoyable uplifting and positive experience.

I was able to rock out to Mumford & Sons which actually blew my mind open, Black Keys did the same in it’s own sexy way. Slightly Stoopid got me on a mellow vibe. Shakey graves, well.. made me shake with glory. And of course I had the opportunity to discover some new artists, like : The Devil Wears Three, Porter Robinson, and  Langhorne Slim (I actually cried)

There was so much SEXY energy. Hot girls, hot guys, and FREAKY BEHAVIOR. It wasn’t so much of like a let’s get down with whips and chains and be freaky like most festivals I’ve been to. It was more like lets be green and clean but also dirty and filthy and fuck the shit out of each other, but with daisy chains in our hair. If that gives any indication of the energy. It felt very ‘clean, but dirty’.

I had my face full-ASS in garbage (literally) the whole weekend so I didn’t necessarily get the fullest experience, but this was very based on observation. A lot of FLIRTING, SEXING, GETTING HIT ON. SEXY BEHAVIOR. I found myself thinking about the opposite sex 30 hours a day it felt like, it was almost like WOAH this is a fucking sex vortex whats happening.

I volunteered with an organization called Clean Vibes  which i highly recommend. They go to many festivals around the country, all you have to do basically is sign up and show up and you get to go to the show FREE, which was amazing because Outside Lands was sold out. They do, however, take the whole waste management thing pretty seriously so if you think it’s a quick free entry, you’re mistaken. LITERALLY FACE FULL OF TRASH for 3 days, but I also was given the opportunity for 4 hours a day to see the artists I wanted, and the freedom to sneak away for a few to shake my butt at a post that I wasn’t stationed. Did I mention that they have you stand at trashcans which are near the stages anyway!? I was a trash talker so I basically just told people where to put their trash, recycling and compost. All while listening to the music and dancing as much as possible. It can be exhausting standing on your feet all those hours but well worth it when you return to your comfy bed and fall asleep the second your eyes close. Good tired.

It’s a great way to meet people and be part of a community, and feel super wiped by the end, and honestly…probably stay more sober than I would otherwise. ANYWHO. It made for a great festival. But every festival has..some complaints. I wouldn’t be giving a fair picture If I didn’t share a few.

1. Some of the girls were BITCHES. Like sorry to say, California girls pick up your act because I don’t have time for little bitches in my life. Of course, the amount of non-bitches far outweighed, but there were some girls that were just mean and nasty and I couldn’t help but think: MY FRIENDS AND I WOULD NEVER HANG OUT WITH YOU, EVER. So there was that, with all that sexual energy, may come competitive nasty bitches.

2. A dick hole or pussy hole… stole my back-pack. Apparently Outsidelands has a reputation for things getting lost. I had lost my credit card the first night surprise… but in addition to simply lost.. stolen too. As I was on my shift just minding my dirty filthy business (latex gloves covered in snot and grease), someone came by and swiped my back-pack. Not only did they steal all of my belongings, they proceeded to use my credit card at jack and the box and buy some ferry tickets. They deserve to die. Case in point. I hate them. Watch your shit, this IS a city, and not to say that this kind of shit doesn’t happen at other festivals, (it did to me at Gnarnia Festival on the top of a freaking mountain in the Carolinas) but watch your shit because there are some sketchy nasty dark mother fuckers in this world that don’t give a shit whether you literally have 5$ to your name, or can not afford a new phone. Anywhoo…

3. This is more of a personal note: but in volunteering I wasn’t able to really connect deeply with my friends who were there for the weekend. I felt a little on the periphery as I could never really get into the flow with them and cell phones were a bitch and to be honest I spent much of the festival on my own. Try and volunteer it with someone maybe would be better? Not to say that flying solo was necessarily a bad thing, in ways it was a very very good thing.

All in all OutsideLands 2015 kicked butt. People were fun and hot and sexy. Music was stellar. I got a chance to twerk and grind, and head bang all in the same weekend. The people were generally cool, the food was good, the staff was friendly and people seemed pretty mellow. People didn’t seem too messed up with the exception of a few, and were generally respectful.

Would I go again? I would say yes. Would I volunteer? Probably not by myself.

If I had a hot sexy boyfriend on my arm, absolutely.